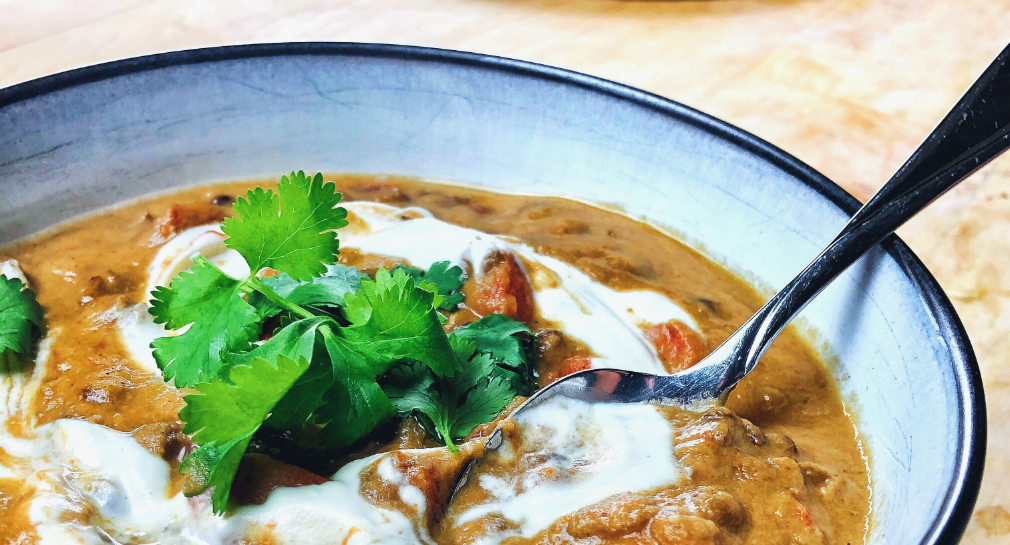 I’m not an eggplant person, and most of the time I do everything I can to avoid them. But, the other day I saw a pretty purple one sitting so lonely at the grocery store that I picked it up and brought it home. It sat in my fridge for about a week before I decided what to do with it.

Roast it? Sure. Puree it? Yes, because I don’t want to know I’m eating it. Use it in a soup? That sounds about right. I know that roasting an eggplant will bring out a light umami flavor that pairs well with browned onions and earthy spices like cumin and chili powder. This soup is a fusion of modern flavors and rustic nostalgia of cold winter nights after a day of ice skating. Creamy and simple with complexity created by the combination of lentils, browned onions, and eggplant puree.

Slice eggplant longitudinally (AKA, in half the long way) and and place on baking sheet flesh side up. Cut carrots either coined or large chunks and place on same baking sheet. Roast for 30 minutes.

*Another method to cook is to slice the eggplant into thick strips and roast at 320F for 20 min in an airfryer. Once cooled, cut the roasted eggplant into small chunks so that they blend smooth after boiling in the stock step of the recipe. I used both racks in my GoWise airfryer oven so that the eggplant strips had some space between.

Set carrots aside to be added to finished soup. Let eggplant cool before handling it. Scoop out as much flesh, and seeds, as possible without also scooping into the skin. You can also cut the eggplant, including the skin, and boil it all with the stock. Some think the skin adds bitterness; however, I haven’t found it to be bitter in this recipe.

In an 8 quart stock pot heat the vegetable stock to a boil. Lower to simmer and add lentils. Cover, and let cook for 20-30 minutes, until lentils are soft but still retain their shape. Cooking for too long will break them down too much. While the lentils are cooking begin the next step.

Peel and slice onions and garlic. You will be pureeing these so how you slice them isn’t important. Saute the onions and garlic over medium heat until browned but not burned. You may have to add some water as you saute so that they don’t burn. This browning process is important for the flavor of the soup, so don’t skip it. Will take 7-10 minutes. Add roasted eggplant, onions and garlic, coconut milk, salt, and soy sauce to blender, or use immersion blender, and puree for 2-3 minutes. This cream sauce should be completely pureed.

Once lentils are finished cooking add in the tomatoes, cumin chili powder, and bring to a simmer. Pour in the eggplant cream sauce and the carrots. Heat fully and serve!

This stew is best served with a dollop of dairy free sour cream and a few leaves of cilantro and green onion tops. You don’t want to overpower the stew with too much of these bright flavors, but they do offer a pleasant contrast to the earthy and warming flavors. Any additions will change the nutrient information provided below. 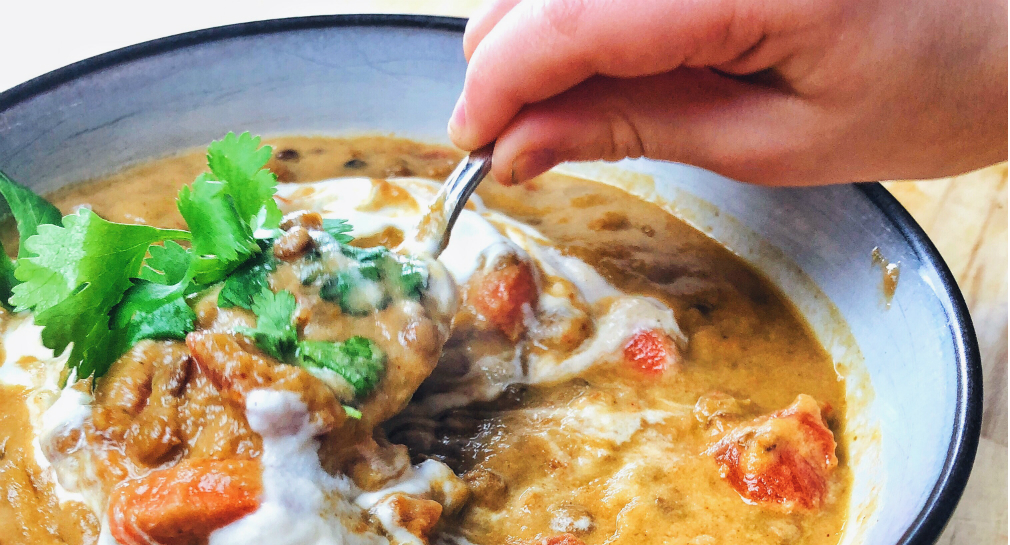 Hand modeling provided by my 4 year old son. After his first bite he said, “I absolutely love this!” However, he did eat a raisin off the floor shortly after and said he liked that too.

Being an adult is pretty stressful and we have so much responsibility that we forget to have fun. #sponsored
Meatless wings made with soy curls! This is the recipe we needed but didn't know it.
It's fun to see what the littles come up with. Here's a hack created by my daughter. No more opening tiny packages for me! Also, @motts fruit snacks don't have gelatin in them!
Vegan gravy recipe. Simple and only a few ingredients but a must have for a holiday table. Dump it on mashed potatoes, veggies, your vegan roast, the table, or your loved ones. Just pour it on everything. 🥳
Airfried chickpeas that are actually crunchy! It’s one of my favorite snack recipes. These cinnamon sugar ones are great for everyday snacking or for a holiday appetizer!
I love making a lattice top for pies. It's iconic and looks good and it's really not hard. Tip: if making a solid weave, do it on parchment then place it on your pie. I traced my pie dish on the parchment so I'd know how big to make it. Two tips for the price of one!

The Crow Moon is the last full moon of winter and is a symbol of rebirth, growth, and beginnings.

My goal is to provide a creative and holistic approach to cooking that empowers people to establish for themselves a healthy and sustainable lifestyle.